Philae island The island of Agilkai (Philae) lies in the center of the lake formed between the Aswan and High Dams.

Vessels approach from the north, and usually along the west side of the island toward its entrance at the southern tip. The boats generally return to the mainland along the east and northern sides. This
latter trip provides the better view of the fine architectural proportions of the monuments.
The main temple of Isis does not conform to the character- istic ground–plan of traditional Greco-Roman temples like those of Edfu, Kom Ombo. andlendera. 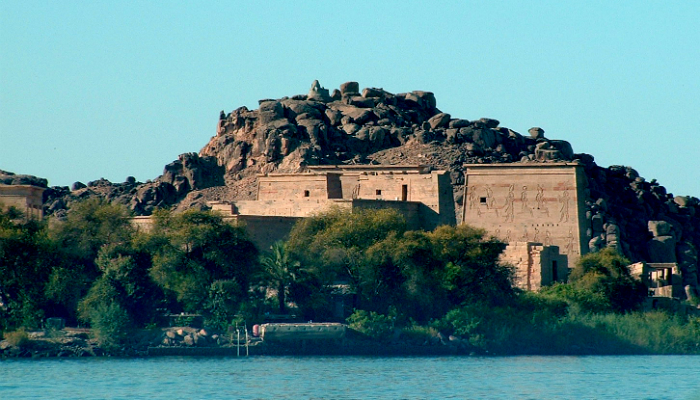 It was an earlier construction. it would appear that some of the architectural features that became standard in later times-such as the practice of enclosing a narrow corridor running along the sides and the back of the whole building-were not yet contemplated.

Access today is a flight of steps (a), slightly east of the original entrance (b).

Ptolemy II (285-247 B.c.) was responsible for the reconstruction of its elegant columns, which have double floral capitals, the upper part bearing sistrum capitals with heads of Hathor.

The screen walls between the columns are crowned with a uraeus frieze and Nektanebo II, the last native ruler of Egypt, making gifts to the gods.

The two pedestals that stand in their original positions were once surmounted by obelisks.

One was erected by the priests in acknowledgment of benefactions bestowed on them by Ptolemy
VIII, and is now at Kingston Lacy in England (p.77). 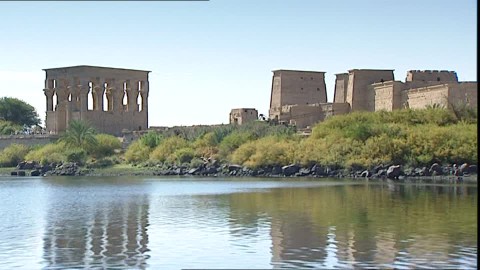 The lower The columns of the original entrance to the Philae temples half of the matching obelisk was later despatched to the same destination.

Ahead is a shrine (c) traditionally dedicated to Arhesnofer,a deity that appears to be a local version of the ancient air god Shu.

This building was enlarged in various stages.

Surviving reliefs indicate that it was begun in the reign of Ptolemy VI Philometor and completed by his successor.
Outer Court ‘ The impressive outer court of the temple (dl is some one hundred meters in length.

It is flanked by colonnades.

The shafts of the thirty-one columns show the Roman emperor Tiberius making offerings to the Egyptian gods.

The ceiling is decorated with stars and vultures.

The representations are finely executed and relatively well preserved.

The capitals of the columns are particularly noteworthy, since no two are alike and the floral motifs are exquisitely carved.

The colonnade to the east was left unfinished. Only six of the sixteen columns were completed.

They are connected by three small shrines: the first to Arhesnofer, the second (el to the god Mandolis, a name derived from the Nubian Merul, and the third (f) to Asklepius and Imhotep, two deities deified as physicians.

The shrine to Mandolis is particularly interesting because of Egypt’s long-standing relationship with Nubia.

The worship of Nubian gods were not suppressed, and Nubians worshiped
Egyptian gods with fervor. 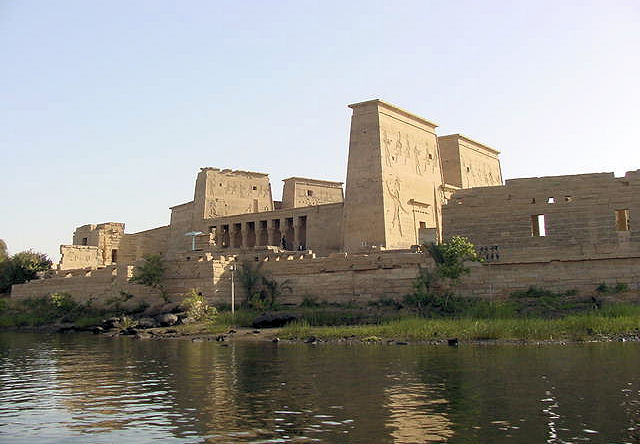 They developed cults for several Egyptian pharaohs, and were permitted to establish a shine to their own deity at Philae.

The shrine dedicated to Asklepius and Imhotep was founded by Ptolemy V and the first Cleopatra shortly after the birth of their son in 186 B.c.

The cult apparently did not last, as the decorations were left unfinished.